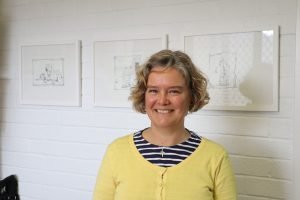 Artist Margot Broug was inspired by the stories that were compiled by her friend Suzanne Romani to mark Jenny’s Place 40th anniversary.

Suzanne edited a commemorative booklet, The Birth of a Dream, which was published in 2017 to celebrate the anniversary. When the two women met, through Interplay Newcastle, Suzanne asked Margot if she would create some illustrations for it.

“She gave me the stories she had put together. Even though the subject is serious, many were told in a humorous way,” Margot said. “I wanted to create the drawings with humour too.”

She created three beautiful drawings that the stories evoked. The first is a touching image epitomising the care provided by Jenny’s Place workers to vulnerable women and children escaping violence.

The second story that suggested a vivid image was about an irate husband who tracked his wife down at the women’s shelter in Islington. The man was causing trouble outside the shelter and police were called. While they were waiting for them, a courageous volunteer who was on duty at the refuge, forced the man to the ground and sat on him, to make sure he didn’t get away before the police arrived.

The third illustration was suggested to Margot by the following playful entry:

“Despite the gruelling actuality of confronting abuse on a daily basis, many workers survived by using humour – often black – and learned to find the ridiculous in whatever came to hand. A classic example of the absurd was a well-remembered mid-1980s Women’s Health directive suggesting refuges advise clients that an excellent way to avoid cystitis would be to expose their vaginas to sunlight for ten minutes each day! At lighter moments during a shift, workers imagined attempting to persuade a group of fragile knicker-less women to raise their skirts and perform a ritual morning can-can in the grassless backyard with the distinct possibility of Bill [a neighbour] peeping through his window.”

Margot offered to sell the three original drawings and donate the proceeds to Jenny’s Place. They were then purchased by Jenny’s Place supporter Sonja Duncan from SD Strategies, who had them framed and then donated the artworks to us.

The three images now take pride of place in our Broadmeadow office. Thank you to Margot and Sonja for helping us to preserve this important piece of our history.

We will be reliving our history and celebrating our achievements at a 45th anniversary celebration breakfast in September this year. Read more and book tickets.

Margot Broug’s latest work will be on show in Clarity in Play, an exhibition opening at Art Systems Wickham Gallery from 6pm on Friday, 8 July.