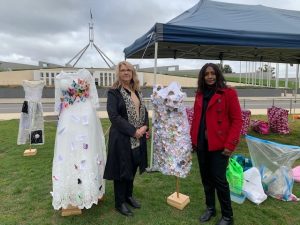 Jenny’s Place staff joined other Newcastle and Lake Macquarie-based women’s domestic violence service providers in Canberra on 24 May to deliver a heavy burden.

After displaying them on the lawn in front of Parliament House, we passed on to the office of the Prime Minister, Scott Morrison, 150 white dresses made by local women to commemorate the lives of women who have been murdered by their intimate partners in recent years.

The aptly-named Dresses of Sorrow have come to weigh heavily upon those frontline workers and our supporters who created them and have safeguarded them since the project began in 2016.

That year, a group of women who have experienced the heartache of women and children experiencing domestic violence in Newcastle committed to creating a memorial dress for every Australian woman who had lost her life to violence during 2016. They made 73. Since then 331 Australian women have been murdered by an intimate partner. Fifteen more have lost their lives so far this year. We thank the Counting Dead Women Australia researchers of Destroy the Joint for their difficult work in producing these statistics.

Heart-sick at bearing the grief of these deaths year after year, we handed on this burden to the Government. We delivered the boxed dresses to the Prime Minister’s office with a letter requesting that they take enduring, sustainable action to stem the death toll of Australian women. The Government’s extraordinary emergency response to keep us all safe during the COVID-19 pandemic shows what can be done if they mobilise the resources to protect women and children.

We thank those members of Parliament who came to the lawn that day to support us. The Member for Newcastle, Sharon Claydon, spoke in Parliament that day in support of our delegation. She will  speak directly to Scott Morrison about the Dresses of Sorrow and what they represent. Other MPs who showed their support included local Members Joel Fitzgibbon and Meryl Swanson, Shadow Minister for Women Tanya Plibersek and Shadow Minister for Families and Social Services and for Preventing Family Violence, Linda Burnie.

Jenny’s Place is a domestic violence and homelessness support service committed to transforming lives. Last year we provided accommodation and outreach services to more than 1,000 women. They are the lucky ones. There are many more that we did not get to meet. Last year, Jenny’s Place was unable to support 558 women referred to us in crisis. We are one service among many – all with the same story.

Our inability to meet a growing demand for our services is heart-breaking. We are sad, and we are angry.

Homelessness is one consequence of domestic violence. Homelessness NSW reports that services are stretched at the seams. Two in three people turned away from homelessness services in NSW are women and children fleeing domestic and family violence. Last year Jenny’s Place helped more than 400 women and children to resolve their homelessness. We recently had an influx of referrals for women over the age of 70, desperate for accommodation after being forced out of the rental market. We are unable to help them all.

Governments need to do more. The National Plan to Reduce Violence against Women and their Children, introduced in 2010, has not succeeded in reducing violence. We call on Government to adopt the recommendations made recently in the report of the Parliamentary Inquiry into family, domestic and sexual violence.

Much more needs to be done through legislation and reform of police procedures to prevent violence against women. These include improvements in the police respond to domestic violence reports and breaches of apprehended violence orders. We need stronger penalties for repeat offenders.

Education and awareness are vital to change the culture that leads to domestic violence. More funding is needed for preventive and early intervention programs and services. Services like the Newcastle Domestic Violence Resource Centre operated by Jenny’s Place. Last year 539 consultations supported women at the Centre to escape violence and avoid crisis or homelessness.

This important preventive service, and many others like it, are unfunded by Government.

Jointly, we call on the Federal Government to:

I urge you to do all you can to help us stem the tide of violent murders in Australia. Support law reform, advocate for victims, and support our services so that we can save more lives at risk.

This opinion piece was published in the Newcastle Herald on 27 May, 2021

AGL Australia staff think outside the square to raise funds for us!

Thanks to our community in 2021

When wishes are granted! Generous donation for our domestic violence services