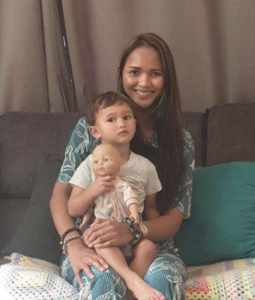 I met my Australian partner in Cambodia. I came to stay with him in Newcastle in 2011. We got married. We moved around for his work, living in Thailand and then Dubai, where my son was born.

Soon after we got married, our relationship changed. He started controlling me and telling me what to do. He put me down and that made me feel uncomfortable about myself. I had no independence. He only gave me enough money to buy what we needed.

One day last year he started to yell and I began to have a panic attack. I decided I had to leave. I grabbed my son and ran to the police station. He was chasing me. It was terrifying. My anxiety was so high, I couldn’t breathe, I was shaking and my heart was racing. I could hardly even talk, my lips were so dry. The policeman gave me about five glasses of water. Finally I was able to tell him what had happened.

My husband came to the police station. He asked ‘Can I have my son, please?’. It was so frightening. He told them that he never abused me. The policeman didn’t know who to believe. But one day in Dubai, he abused me and I recorded it on my phone. Every word he said, the yelling and him hitting me with my son sitting on my lap. When the policeman heard the recording, he believed me. They locked him up for eight hours. They sent me home to pack a bag and took me to the safe house.

I was exhausted and my son had fallen asleep on my shoulder. They were so nice. They bought dinner for me and my son. I worried about what I was going to do. We stayed there for one week, then moved to Jenny’s Place in Newcastle for two months. Then they offered me a women’s housing property to rent for half price, where I lived for six months. We finally moved into a private rental house.

Jenny’s Place helped me with the move. They paid for a truck and removalist. Now I have a home with my son in a safe place. Jenny’s Place referred me to Victims Services. Every two weeks they call me, with support and counselling. Recently I got a job not far from home. Things are getting better. Now I have a job, rent and income. Next I want to get my driver’s licence and then hopefully a car.

My husband thought he could do anything he wanted to me. I stood up to him and now I’m back on my feet. I don’t feel frightened any more.

AGL Australia staff think outside the square to raise funds for us!

Thanks to our community in 2021

When wishes are granted! Generous donation for our domestic violence services