Seeking Sponsors for our Simpson Desert Hike
Support Us 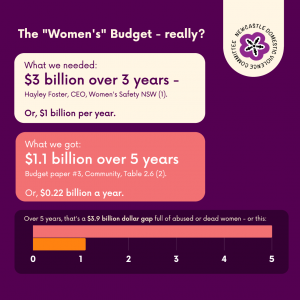 The Morrison Government made a record commitment to women’s safety in the 2021 Budget, with a $1.1 billion package to be rolled out over five years.

Jenny’s Place joins the Newcastle Domestic Violence (DV) Committee and other frontline domestic violence services around Australia to respectfully point out that this amount, allocated in the so-called ‘Women’s Budget’, is grossly inadequate.

We are in the middle of an epidemic of violence against women and children in Australia. One woman a week (on average) continues to die at the hands of her intimate partner. For every woman who loses her life to domestic violence, there are thousands who continue to experience it every day. We need to do more.

Peak body Women’s Safety NSW has identified the extent of the short fall in federal government funding for domestic violence services/programs. They have called for three times this amount, or $1 billion a year, to be committed to women’s safety organisations across the country to meet critical gaps in frontline domestic and family violence services. Their CEO Hayley Foster says the budget fails to address the fact that an estimated 9 out of 10 women experiencing violence, who want to be supported to stay home safely with the abuser excluded, can’t access these critical services.

“Nor does it address the fact that 1 in 3 women and girls seeking accommodation to flee violence cannot be housed,” Ms Foster says.

These figures are echoed in Jenny’s Place client statistics. We saw a significant increase in referrals to our services in 2020-21. We supported 1,244 clients over the year, 15 per cent more than the 2019-20 financial year. However, of the 653 women referred to us in crisis, we were only able to house 12 per cent (n=78) in our refuges over the financial year. We were unable to accommodate 575 women and 434 children referred to us. Our Domestic Violence Resource Centre provided counselling and support to 221 women, yet it is not funded by Government.

Difficulty finding safe and affordable housing has caused enormous stress and instability for local families. The increasing cost of private rentals and shortage of available social housing has forced many of the women and children in our care to return to violent partners. We have had a dramatic increase in the number of older women seeking support to avoid homelessness.

The Newcastle DV Committee compared the budget allocations for women’s safety with other projects funded in the ‘Women’s Budget’. For example, the amount of budget funding for planes and travel agents was three times that allocated for women’s safety. The Committee circulated an info-graphic to highlight the budgetary funding gaps in advance of the National Summit on Women’s Safety, which was held in Canberra on September 6 and 7.

The Summit focused on key issues affecting women’s safety including the prevention of violence, technology and abuse, coercive control, policing and justice responses, sexual violence, frontline service delivery and innovation, violence experienced by Aboriginal and Torres Strait Islander women and strengthening partnerships with the private sector to prevent and reduce violence. Many of the participants reiterated our calls for increased Government commitment to change.

A series of Federal, State and Territory Government roundtables were held prior to the Summit. The roundtables, together with the Summit discussions on issues affecting women’s safety, will contribute insights and help determine the priorities for the next National Plan to Reduce Violence Against Women and Their Children.

This will be the fifth iteration of this plan in 11 years. Over this time very little has changed for victims of domestic abuse. Very little has changed in the underlying social factors that perpetuate this culture of violence. We call on the Government to increase your commitment to protecting victims of family violence, and addressing the underlying social factors leading to this epidemic where one woman is murdered every week in Australia.

The pleas of survivors, frontline service providers and other expert practitioners were voiced at the Summit. They called for consistent legislation, more support for victims of sexual and domestic violence in the justice and legal systems, and more support for programs – from early intervention and education to increasing support for victims’ services and accommodation. We hope Government takes them into account in developing a National Plan that, with meaningful investment, can actually make a difference and change our course in Australia in terms of family violence.

We commend the record amount of funding allocated by the Government in the 2021 Budget as a positive starting point. We call upon them now to increase that commitment, to join with us and other service providers to make a real and lasting impact. An impact that will not only change outcomes for vulnerable women and children but will also begin the social reform needed to break the cycle of violence plaguing our great nation.

This article was published in the Newcastle Herald, to read click here: https://www.newcastleherald.com.au/story/7429162/womens-budget-really-we-need-more/?cs=4464

Pride and passion from our pioneers

The Birth of a Dream – now available online